A BLONDE LOCK OF HAIR

A BLONDE LOCK OF HAIR 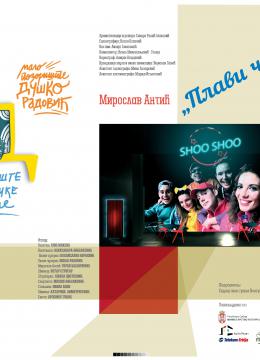 Seeking to present to young people the magic of first love, but also to figure out their fears, hopes and sufferings, the performance “A Blonde Lock of Hair” follows in a modern way the growing up and fate of a generation in our country. Combining music, dance and acting, this performance tells the story of dreams and secrets while falling in love for the first time, problems with parents, teachers and the system in which one generation is born and grows until school friends part their ways. Created as a musical spectacle, with modern choreography and special effects, this show follows the poet’s basic idea of using the word “child” in a way to preserve the dignity of vast innocence in the "maturing of intelligence” period.
The creative team consists of Nenad Milosavljević - Galija (music), Vesna Popović (set design), Lidija Jovanović (costume design), Damjan Kecojević (choreography) and Vojislav Savić (video animation). Theatrical adaptation and directing were done by Sandra  Rodić-Janković. In addition to a number of actors from the ensemble, these guest actors appear in the show: Petar Strugar, Ivana Adžić, Katarina Dimitrijević and Arsenije Tubić.

In the year of important anniversaries - 50 years since the first edition of the collection of poems "A Blonde Lock of Hair" and the 66th anniversary of Little Theatre Duško Radović, teenagers will be happy to see the eponymous performance, inspired by the poetry of Miroslav Antić and staged on the Children's Scene by Sandra Rodić Janković.
Seeking to bring closer to young people all the magic of first love, but also to figure out their fears, hopes and sufferings, through the poetry written by the "eternal boy with a grey lock of hair on his head" who truly understands those who are neither kids nor adults, "A Blonde Lock of Hair" follows in a modern way the growing up and fate of a generation in our country, from meeting with the first curl on the forehead to the first wrinkle that appears on it and stays with us for our entire lives.
Although created as a musical spectacle, with modern choreography and special effects, this show follows the poet’s basic idea of using the word “child” in a way to preserve the dignity of vast innocence in the "maturing of intelligence” period.
Combining music, dance, singing and acting, “A Blue Lock of Hair” tells the story of dreams and secrets while falling in love for the first time, problems with parents, teachers and the system in which one generation is born and grows until school friends part their ways.
"When the years fade away in the infinity and distance and when the mischievous blonde lock of hair turns grey, you realise that this crumb, a tiny crumb of childhood, is worth a new life.”

Sandra Rodić Janković graduated in acting (1991) and directing (2000) at Krastyo Sarafov National Academy for Theatre and Film Arts - NATFIZ in Sofia, in the class of Professor Dora Ruskova and Professor Atanas Ilkov.
She won Milena Sadžak Award for best young actor twice, at 23rd and 24th Festival of Professional Puppet Theatres in Serbia and the annual Milena Načić Award granted by Little Theatre Duško Radović. She received The Best Young Actress Award at the film festival in Niš for the role of Saška in the film "In the Middle of Nowhere".
In Little Theatre Duško Radović she wrote and directed the plays: "Masks", "Cats" and "A Night in Merlin’s Castle", which was performed 221 times.
She worked as a journalist and was an editor and presenter of the notable shows for children and youth on RTS: "A School Break" and "Roadmap".
She lives and works in Belgrade.

A FEW FACTS ABOUT ME: MIROSLAV ANTIĆ

"I was born in 1932 in the northern Banat village of Mokrin, where I went to primary school. In attended secondary school in Kikinda and Pančevo and studied in Belgrade. I live in Novi Sad. This is my pure biography. In fact, I am telling everyone that I still don’t have my real biography, the one I would like to have, despite so many books that I have written, pictures that I have exhibited, films that I have made, plays, stories in newspapers, etc. Every morning, I want to start creating an excellent biography, which would serve, if no one else, at least school pupils because they, unfortunately, have to learn about the writer’s life.
I would be the worst pupil because I haven’t learned even about my own life. And I've been doing various things. I was a bricklayer's assistant, manual worker in a brewery, pier worker, sailor, stage director; I have dealt with water supply and sewage, radio compressors; I processed wood; I can make a roof; I acted in a puppet theatre; I even made puppets; I was a television show presenter, master of ceremonies, etc.
I also have some awards and recognitions. Two Neven Awards. One for lifetime achievement in poetry for children. Goran Award. Sterija Theatre Award. Golden Arena for screenplay. Vojvodina Liberation Award. Seventh July Award of Serbia. I have received the Order of Merit. Someone could use it to write countless pages. For example:  I edited magazine "Rhythm" or Zmaj’s "Neven".
I prefer you invent my biography. Then I'll have many different lives and be the liveliest among the living. I said other things, which should not be used to present the writer but rather whispered, in the poem "In Memoriam". And in all my other poems.”

It's always nice to be back here. It is safe and warm in this world imagined by ourselves. And every time this world is different. It is neither better nor worse, just always created from the beginning. As great Mika said: "Not all of us have the same dreams and it does not bother anyone. Why is then everyone bothered when we are differently awake?“
Vesna Popović, Set Designer
Growing up with the poetry of Mika Antić, we all created our own world of images and feelings associated with certain poems that marked us in some way. Working on “A Blonde Lock of Hair” has provided me with the opportunity to embody these visions at least partially, but this time in a contemporary setting and applying the theatrical aesthetics of the 21st century. This is “A Blonde Lock of Hair” of modern children who face the same concerns, hopes, turmoil and dreams in the new circumstances.
Lidija Jovanović, Costume Designer
Childhood, growing up and first love in the delicate and mysterious world of children’s intimacy are described in a modern way and with variable rhythm.
Vojislav Savić