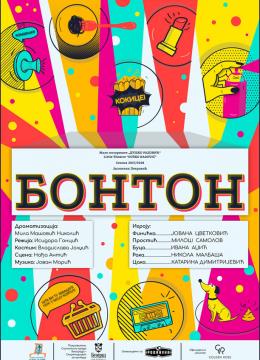 The performance Good Manners, based on the eponymous book authored by Jasminka Petrović, was created to present to school-age children the rules of good behaviour, acceptable communication, respect for the rights and freedoms of others, and to awaken the spirit of good neighbourly behaviour and empathy for others. By interacting with comic and grotesque characters Mrs Good Manners (Jovana Cvetković) and Mr Bad Manners (Miloš Samolov), who can be found in any place and at any time, a group of teenagers: the girls Buca (Ivana Adžić) and Caka (Katarina Dimitrijević) and their friend - boy Raka (Nikola Malbaša), find themselves in various pleasant and not so pleasant situations. The exit from each of these adventures is the way to make the characters and the audience smarter and more noble, but also to make them think about how someone's benevolent or malevolent gesture is actually perceived by others.
The authorship team consists of Isidora Goncić (director), Mila Mašović-Nikolić (playwright), Vladislava Joldžić (costume design), Nađa Antić (set design) and Jovan Marić (music).

Be what you are
These are not only phrases
Follow well yourself
And your own phases.
Try to do
The best you can
Don’t let the majority
Influence your brain.

Sometimes the rules are irritating and you try to avoid them.
When you are told: It MUST be done, you think “Well, I don’t have to.”
When you are warned that something SHOULD be done, you answer “Well, it shouldn’t!”
But start from yourself. And don't do to others what you don't want done to you.
You are not alone in the world and some rules of behaviour and decency are imposed on their own. Therefore, be good, smile, say "thank you" and "sorry" and, of course, be your own self.
Isidora Goncić

A WORD FROM THE AUTHOR
My son gave me the idea for writing the book Good Manners. "But write it to be funny, not boring," he advised me. I went to a library and looked for all the books on this topic. There were really many of them. After reading all of them, I had numerous questions: Who am I to teach anyone about good manners? How to right about good manners in a humorous and not in a boring way? Do I behave properly in all situations? Do we need one more book on etiquette when we already have so many?  And then I came across the famous text of Arthur Schopenhauer: “On a cold day a hedgehog will search out other hedgehogs to huddle up with to keep warm. It would be easy if they didn’t have sharp spines. But hedgehogs have long and sharp spines. When they huddle up, they get spiked. That’s not good. But when it’s cold it is not good either. That’s why hedgehogs struggle for a long time until they find a good distance: to stay together without spiking. That distance is called good manners. These are good manners: that I don’t hurt you, that you don’t hurt me, that we help each other, that it’s good for both of us. Suddenly, it dawned on me. “It will not be a book about good manners but about tolerance”. And so, with the support of the publishing house Kreativni centar and great illustrations by Bob Živković, the book Good Manners saw the light of the day. So far, seven editions have been published, the book has been translated into several languages, some parts of the text have been introduces into school textbooks, and it also having its theatrical premiere. It seems that it’s not boring after all.
Jasminka Petrović

A WORD FROM THE PLAYWRIGHT
It is a challenge for every playwright to dramatise the material that is not just literature, but an elusive form of didactic text that carries in itself the richness of a dramatic charm. Can all of this be usually found in etiquette books? An etiquette book is primarily a handbook on good manners, isn’t it?! However, in the case of Good Manners authored by Jasminka Petrović, the answer is: NO! The witty descriptions of different situations offer an abundance of theatrical scenes, which resemble real-life situations a lot, but they are presented so imaginatively to make us see all good and bad versions of ourselves and others. Everything that is only suggested in the book is brought to the climax in the play. All parts of the book that are rich in dramatic content found their place in the play.  And the audience, whether young or grown up, together with Mrs Good Manners, Mr Bad Manners and teenagers from the neighbourhood, can see the fragments of life. In these fragments, it is possible to get to know the deeper truth, not only who has good or bad manners, but also the real nature of persons hiding behind the mask of proper behaviour.
Мila Mašović-Nikolić

ABOUT THE AUTHORS
Isidora Goncić was born in 1990 in Belgrade. She graduated in stage and radio directing at the Faculty of Dramatic Arts in Belgrade, in the class of Professor Ivana Vujić.
She worked as Assistant Director in the following plays: ZORBA THE GREEK (Mihajlo Vukobratović, Terazije Theatre and Budva City Theatre), PLAY POPOVIĆ (Ivana Vujić, Atelje 212 and the Cultural Centre of Pančevo), A CRAZY HEAD (Nikola Bulatović, Terazije Theatre and the Cultural Centre of  Čačak), ZONA ZAMFIROVA (Kokan Mladenović, Terazije Theatre), BETRAYAL (Goran Šušljik, Yugoslav Drama Theatre), CASED/LOST IN SERBIA (Kokan Mladenović, DADOV), KASIMIR AND KAROLINE (Snežana Trišić, Atelje 212).
Stage directing:  THE MUSE, Muza Pavlovna (Cultural Centre Vuk Karadžić, 2012), A CALL, Darko Marjanović (DADOV, 2012), THE FROG PRINCE, David Mamet (Mata Milošević Scene, Faculty of Dramatic Arts, 2013) THE BOLD SOPRANO, Eugene Ionesko (Atelje 212, 2014) , LEPTIRICA, Milovan Glišić / Dimitrije Kokanov (DADOV, 2015), HICCUPS, Vladimir Zujev (Cultural Centre Vuk Karadžić, 2016), Rodgers & Hammerstein's CINDERELLA,  (Emotion Production), FROM A TO YES (Cultural Centre Vuk Karadžić, 2017) IT CAN’T HAPPEN HERE, Radivoje Domanović and Slobodan Obradović (National Theatre, Pirot, 2018).
Director of poetry performances (Dormitory for Secondary School Students Jelica Milovanović) as part of the competition of dormitories, 2015 and 2016 (THE RAVEN, Edgar Allan Poe and THE DEATH OF THE JUGOVIĆ MOTHER).
Director of Nevski Quartet concert SECOND OF APRIL BLOWING, 2015.
Co-director of concert OTHER SIDE OF NORMALITY, Take Over Festival (Youth Council Kolarac and Association Prostor).
Јasminka Petrović wrote around thirty books for children and youth (Everything is All Right, The Summer I Learned to Fly,  This is the Worst Day of My Life, Good Manners, Sex for Beginners, Reading Makes You Grow, For Your Ears Only, I Want to Go Home, Are You a Frog?, 35 Calories and No Sugar, etc.). Her books have been translated into twenty-five languages, and some of them were dramatised in the theatres in Belgrade, Sarajevo, Zagreb and Stockholm. Her book About a Button and Happiness was the basis for the play Miljakovac, that is - New Zealand performed in Little Theatre Duško Radović and for the recent film Zlogonje. Jasminka wrote for many magazines (TIK-TAK, Veliko dvorište, Politikin Zabavnik, etc.). She edited the National Geographic Junior magazine in the Serbian language. She has participated in various projects for children and youth and has been a frequent guest of school and city libraries. With the association KROKODIL, she organises a literary festival for children KROKODOKODIL. She is a scriptwriter for the children’s TV show  Cock-a-doodle-doo Show (RTS). She is a co-founder of the movement for the improvement of culture.