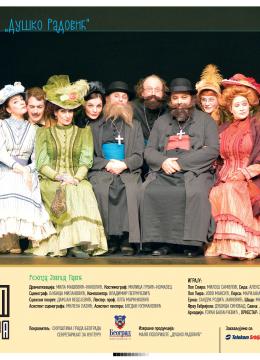 A romantic comedy in which the families of two priests live in harmony until a young teacher appears in their lives and both families see him as a perfect groom for their daughters. The central plot and numerous complications reported by a village gossip are based on the love adventures of priests’ daughters Jula and Melanija, country boy Šaca and "dream groom" Pera. While the novel deals mainly with the conflict between parents, this performance focuses on the relationship between young people. The new interpretation of the famous novel written by Stevan Sremac is credited to director Jovica Pavić, while Mila Mašović-Nikolić wrote a script. In the 24th festival entitled "The Days of Zoran Radmilović” in Zaječar 2015, the play "Priest Ćira and Priest Spira" was granted the Krstomir Milovanović Award for visual identity,  which is credited to costume designer Milica Grbić-Komazec and set designer Ljubica Milanović.

"Priest Ćira and Priest Spira" is a belle epoqueromantic comedy. The families of two priests live in harmony until a young teacher appears in their lives and both families see him as a perfect groom for their respective daughters. The central plot and numerous complications reported by a village gossip are based on the love adventures of priests’ daughters Jula and Melanija, country boy Šaca and "dream groom" Pera. While the novel deals mainly with the conflict between parents, this performance focuses on the relationship between young people. Presented in the spirit of poetic realism, they initiate the eternal themes of growing up, such as a conflict between youthful ideals, enthusiasms and dreams on the one hand and ambitions, conventions and expectations of young people in a rural community on the other hand.

A WORD FROM THE PLAYWRIGHT

Theatrical adaptation of the mature realist novel written by Stevan Sremac, who also happens to be an excellent humorist, is a big task and not an easy one. In this dramatisation, I have tried to show how the "funny" does not arise only from funny agons, i.e. bickering and outwitting, which is the characteristic of Sremac’s famous writing style, but also from what remains unsaid. In this performance, non-verbal scenes reveal much more about the relationships and emotions exchanged between the main actors, and they are the real background of the story about a fight between the neighbours (respectable persons).
I have chosen none other than a village gossip, Frau Gabrijela, to be to our guide through the "rural war". Perhaps even the late writer should thank her quick tongue due to which this event was remembered and found its place in Serbian literature. I’m joking. My intention was to show, through the narrator, that this is not just a comedy that laughs at our mindset, but also the comedy that mocks clichés and stereotypical thinking that make this mindset, for example that only women are guilty of all the evil.

What I have found interesting is to follow the relationship between theatre and film as media, which will be seen particularly in the simultaneous scenes. In stylistic terms, this performance is expressed as poetic realism on the one hand, while on the other hand it has a certain Fellinian spirit and deflection from reality.
When you hear the title, the first association is that this play is set in the plain. However, I wanted to situate the action in a curved space, in a surrealistic corner, symbolically put on the back burner, i.e in the rural environment.
As regards stage movement, I have tried to create a specific link between the environment and the characters. In this sense, everything, including costumes and movements, must be somewhat wondrous, curved, exaggerated, in order to create a surreal microcosm, which is close both to naive painting and to avant-garde.
Јоvica Pavić, Director
WARNING: The professors of literature, as well as those with weak hearts, watch the show at their own risk.

INTERESTING FACTS ABOUT THE AUTHOR AND HIS WORK

Stevan Sremac (1855-1906) is one of the most read writers of Serbian realism. He earned the title of academician of the Serbian Royal Academy thanks to his humorous spirit.
He spent his childhood in his native town of Senta. He grew up in a tailor's family. His grandfather strongly opposed to the love of his parents Katarina and Avram. When Stevan Sremac became an orphan, the grandfather took care of him.
His uncle Jovan Đorđević, our famous historian and writer, one of the founders of the National Theatre in Belgrade, enabled young Sremac to get education. He told him an anecdote about priests, which Sremac later used for the novel "Priest Ćira and Priest Spira".
Based on this novel, the first Yugoslav colour film was shot in 1957. It was directed by Sofija Soja Jovanović. In 1982, the TV series was made with Đorđe Balašević in the role of narrator (Šaca).
Stevan Sremac stayed most of his life in the newly liberated southern regions, i.e. the so-called “Old Serbia”, where he heard the largest number of the stories that brought him popularity, such as: "Ivko’s Feast", "Zona Zamfirova" and others.
It has been recorded that Stevan Sremac strongly opposed to dramatisation of his novels and was sending various letters and complaints throughout his entire life trying to prevent the travelling actors to use his texts.
The Serbian Orthodox Church advocated for excluding this novel from school reading because of the way of presenting priests.