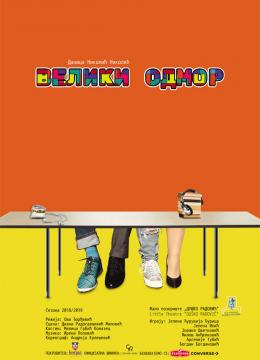 Is school life really the best period of human life? Does every adult wish to return to that period at least once, at least for an hour? Were we happier in that period, were our problems smaller, are we now wiser, but sadder?  Do we all need A School Break?

A WORD FROM THE AUTHOR
A School Break is a story about six (very) grown up people who find some sort of mechanism that helps them cope with their (imperfect) lives. This is precisely how they manage to cope with all the temptations to which almost all middle-aged people are exposed. Six of them, childhood friends from the same class, established a kind of regression therapy that they practice, similarly, for example, to playing squash on a regular basis. All their imperfections, patterns of behaviour from childhood, all their vulnerabilities (sometimes almost comical), reveal to the audience the human being, the human form of existence. A living human being in flesh and blood who, in spite of everything, finds a modus vivendi in the era of consumerism at the beginning of the 21st century. Through laughter and face spasm that simulates laughter even when it is not funny, Olja Đordjević and we (her team of authors) want to show to young people (and those who are not so young) that the awareness of togetherness, friendship, sharing good and difficult moments with dear people, can and will help them cope with various levels of this game called life.
Danica Nikolić Nikolić

ABOUT THE DIRECTOR
She was born and grew up in Belgrade. She completed three years of 13th Belgrade High School and then Jefferson Performing Arts High School in Portland, Oregon.  She graduated from the Department of Multimedia Directing in the class of Professor Bora Drašković at the Academy of Arts in Novi Sad.  She participated in the organisation of festivals BITEF Theatre, Sterija Theatre Festival and Joy of Europe. Since 2006 she has been the Manager of Serbian Language Drama Section in the National Theatre in Subotica. Significant plays:
THE BOYS IN THE BAND - Mart Crowley; THE RIGHT TO THE RUSSIAN - Uglješa Šajtinac; WE BOMBED IN NEW HAVEN - Joseph Heller; OTHELLO - William Shakespeare; NOISES OFF - Michael Frayn; BLACK COMEDY - Peter Shaffer; THE APARTMENT - Neil Simon; MUCH ADO ABOUT NOTHING - William Shakespeare; BEREAVED FAMILY - Branislav Nušić; THERAPY - Durang/Đorđević (special Sterija Award for performance); A FLEA IN HER EAR - Georges Feydeau, RUMORS - Neil Simon; EUFEMMEIZAM - author's project; HASANAGINICA - Ljubomir Simović; A SUSPECT INDIVIDUAL - Branislav Nušić (Best Director Award at the Festival Mostarska Liska); CASSÉ - Rémi De Vos; DINNER FOR SCHMUCKS - Francis Veber; THE MARRIAGE OF BETTE AND BOO - Christopher Durang; COMPLETELY SHORTENED HISTORY OF SERBIA - author's project, Obradović/Pelević (Miodrag Petrović-Čkalja Award and Jovanča Micić Statuette for best performance by audience votes, special award of Politika daily and special prize "for collective play"); AS LONG AS I PROVIDE FOOD AND CLOTHING FOR YOU - author's project, Danica Nikolić Nikolić (Turkey Statuette for Best Director, Days of Comedy Festival in Jagodina), etc.

ABOUT THE AUTHOR
I was born in Belgrade in 1978. I write for theatre, television and radio. I publish a novel or drama from time to time. In the meantime I am the mother of a three-year old who is a combination of Dennis the Menace and Huckleberry Finn. It is a drama in itself.