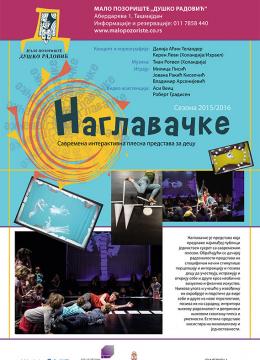 A modern interactive dance performance for children. “Upside Down” is a performance that offers to the youngest audience a unique encounter with contemporary dance. Appealing to children's curiosity, the performance stimulates perception and interaction in a specific way and invites children to participate, explore and discover themselves and others through an unusual visual and physical experience.

”Upside Down” is a performance that offers to the youngest audience a unique encounter with contemporary dance. Appealing to children's curiosity, the performance stimulates perception and interaction in a specific way and invites children to participate, explore and discover themselves and others through an unusual visual and physical experience. Their role and participation in the performance encourage and motivate them to see themselves and others from a new perspective, prompt them to cooperate, kindle their curiosity and contribute to their understanding of dance and art. The aesthetics of the performance insists on minimalism and simplicity. Departing from the theatrical conventions, the performance favours spontaneity, risk and an open-end approach.

The main idea of the performance is based on an interactive structure that suggests a perceptual journey from space to the object, from the object to the body and movement, and finally, from the movement to dance.  With the aim of further stimulating the perceptual experience of the audience, the live-video technique is used in the performance, opening to the audience an unusual perspective of performing actions and emphasising the visual aspect of activity, thus contributing to the interactive component of the performance in a specific way.  Using the objects available in everyday life, with an emphasis on recycling, and using the simple old-school technology, the content of the performance leaves much room for children’s imagination and playfulness.
The partners involved in the project implementation and the authors share the view that the project priority is the regularity of performance and availability to the largest possible audiences, and therefore after the process of research and creation, the performance will be left in the hands of the local performers in Poland, Serbia, Sweden and the Netherlands.
Numerous studies confirm the importance of children's interactive encounter with art. Stimulating experiences that encourage participation through movement and creativity contribute to the cognitive development of children, build self-confidence and creativity and influence their future understanding of the world and their role in it.

Dalija Aćin Thelander
She was born in 1974. She completed the Ballet School Lujo Davičo and acquired contemporary dance knowledge and practice through many programmes in Europe.
She presented her choreographic works in numerous festivals in the country and abroad (Impulstanz, Tanz im August, URB Festival, Les Particules, Tazntendezen, Mladi levi, Week of Contemporary Dance, Oppla, Performa, BITEF, BELEF, Infant, etc.) and collaborated with international choreographers.
She won the prestigious award of Impulstanz festival - Prix Jardin d'Europe (2008) and Special Award for New Tendencies in Theatre, Infant Festival (2007), for the play "Handle with Great Care", Special Prize of International Festival TIBA (2009), Award for Best Performance of the Children Festival MESS for “The Book of Wandering” (2011) and Audience Award of Festival MESS for the performance for babies "Some Very Important Things", as well as Sterija Award for Stage Movement for "Metamorphoses" (2014) and the Annual Special Award for an innovative approach in contemporary dance theatre, granted by the Association of Ballet Artists of Serbia for the performance for children “The Dream of a Yellow Sock” (2014).
She is the author of plays for children, "Hall and Handen" (2014), “The Dream of a Yellow Sock” (2013), "Who Would Want a Mum Like Mine" (2010), "The Book of Wandering" (2008); performance for babies "Some Very Important Things" (2010) and "Sensescapes" (2015), and the choreographic installations “Baby Space", produced in Denmark (2014), Poland (2013) and Belgrade (2015 and 2011). She has worked with stage directors such as Aleksandar Popovski, Nebojša Bradić, Goran Marković, Anja Suša, Robert Raponja, Selma Spahić, Đurđa Tešić, Anđelka Nikolić.
She is a co-founder and coordinator of the Station Service for Contemporary Dance, and a co-founder of Nomad Dance Academy programme.
She is an initiator and coordinator of Generator - a collaborative platform for development of dance theatre for children in the Balkan region, organised by the Station Service for Contemporary Dance and partner organisations from Croatia, Macedonia and Bosnia and Herzegovina.
Since 2012 she has been living in Stockholm (Sweden).

Кeren Levi
Кеren Levi is an Israeli choreographer who lives in Amsterdam (Netherlands). Her work is primarily interdisciplinary and consists of dance, music and visual artistic creation, but its very essence is based on the choreographic principles. Levi lectures in the School for New Dance Development, festivals, training courses, and also instructs dance groups across Europe. In 2014, she completed master studies of choreography in Amsterdam.